There is ample archeological evidence that Zion Canyon was settled first by erstwhile indigenous people. The earliest Basket maker culture in Zion dates to approximately 500 A.D. and settlement appeared to be continuous until the Anazasi abandoned the Zion area around 1200 A.D. The earliest Europeans to arrive in the area found the Paiute people cultivating crops along the Virgin River.

The first explorers of European descent were members of the Dominguez-Escalante party, who crossed the Virgin River near the present site of LaVerkin in 1776, and various trappers and traders, as well as Spaniards en route to California from New Mexico, passed through the area but left little record of their passing. 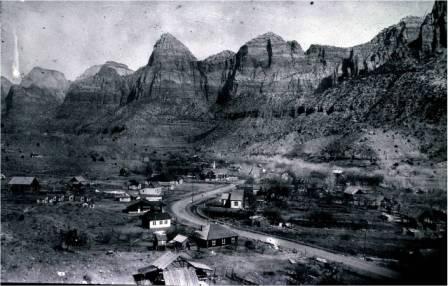 The actual settlement of Springdale in its present location occurred in the fall of 1862 when a hearty group of Mormon pioneers, responding to the call from Brigham Young to establish a Cotton Mission in the south, came to the mouth of the canyon. Local lore has it that Albert Petty, one of the first Mormon settlers, took his wife to the spot he had chosen for their house beside some large springs and asked her to name their new home. She called it Springdale.

The Springdale town site was surveyed in 1863 and, ironically, in 1864 Springdale became a branch or satellite of the much larger and well-developed community of Rockville, a few miles to the west. Springdale settlers regularly traveled to Rockville to shop, to go to church or to receive and send messages at the post office and telegraph office. Springdale had none of these conveniences until some time later. A public building, used as a school and a church, was built around 1885, and the first post office opened in Springdale in 1897.

Life was difficult at first. The original houses were built of rough-hewn logs or river willows and chinked or covered with mud. Roofs were made of willows lashed together and covered with bark and dirt. Few houses had the luxury of glass panes for windows. Clothing and tools were largely homemade, and because there was little commerce with the world outside, Springdale residents were almost totally self-sufficient. And, of course, settlers were constantly alert to the danger of hostile Indians or the ravages of nature in the form of raging flash floods, drought or rockslides.

Although they waited many years for the conveniences we take for granted today, early settlers recognized the importance of education, and schools were begun as soon as the town was settled. At first, school was held in homes and books and supplies were limited. Individual residents donated books and supplies, and attendance was haphazard at best, since every child's first duty was to help the family eke out a subsistence living in the fields, pastures and orchards. Children often took turns going to school, and those who attended learned reading, some writing, a little arithmetic, and spelling.

Springdale remained a sleepy Mormon agricultural settlement until after the turn of the twentieth century. Around 1912, roads into the area had improved enough that a resident from a nearby town drove the first automobile into Springdale, and by 1917, groups of tourists from as far away as Salt Lake City were arriving in town to stay at Wylie Way Camp, one of Zion's first tourist facilities. Springdale was about to change forever.

On September 15, 1920, Mukuntuweap National Monument was dedicated. It would later become Zion National Park. From that point, the changes were stunning in their speed. Electricity, gasoline, tourist camps and stores grew up to meet the needs of the tourists. Young men found employment in the new national monument, and many left their family farms to begin new careers in resource management and tourism. Eventually a paved road, telephones and other amenities followed.

For nearly a century following its settlement, Springdale had seemed isolated because of the closed nature of the canyon. There had been one way in and out. Even though the now-famous cable works were begun in 1901 to bring timber into the canyon from the East Rim of Zion, no highway allowed access to the community and the park from the east. That all changed with the construction of the Zion-Mt. Carmel Highway and Tunnel, dedicated in 1930. The tunnel, nearly a mile long and carved through solid sandstone, eerily cool, damp and dark, but wide enough barely for two lanes of traffic, helped to bring the world to Springdale's door as word of the magnificent features of Zion National Park began to reach the outside world.

By the mid-twentieth century, Springdale began to boom, and residents of the unincorporated, sprawling village recognized a need for some form of local government. In 1959, Springdale incorporated to become a municipality. As time passed, the old Mormon pioneer features of the community were replaced by contemporary structures necessary to sustain the bustling tourist economy that Springdale enjoys today. Even with such changes, many of the core values of its pioneer settlers still endure. Throughout the town, the pioneer architecture incorporating native sandstone and other design features from its past are clearly evident. Most importantly, Springdale remains a friendly, safe and clean community, the home of residents who are committed to providing stewardship worthy of a place unique in the world for its beauty and spiritual qualities.
CITATION
Payments
Parking
Info
Utility
services
Report a
CONCERN
AGENDAS & MINUTES
Shuttle
[]